Ghavami Plastic Surgery patients come from all over the globe to Beverly Hills, California

Dr. Ashkan Ghavami, MD, is a respected authority in the field of plastic surgery and is board certified by the American Board of Plastic Surgery. Dr. Ghavami has made a name for himself in the competitive area of Los Angeles and Beverly Hills as one of the top celebrity “go-to” plastic surgeons. Dr. Ghavami has a reputation for delivering amazing results from procedures ranging from rhinoplasty to Botox injections to breast augmentation. Dr. Ghavami is an executive board member of The Rhinoplasty Society and a world-recognized lecturer who is invited to speak at meetings of various cosmetic surgery societies. Plastic surgeon specialist Dr. Ghavami has also managed to gather a large organic following through his social media platforms which display and confirm his work and provide an honest depiction of his surgical and non-surgical procedure results.

To see examples of Dr. Ghavami’s exceptional work, please browse through his before and after photo gallery.

In Beverly Hills, I see noses of all ethnic origins.  These range from Persian (Iranian Rhinoplasty), Hispanic, and African-American to Israeli, Arab, and Asian.  Rhinoplasty is in and of itself a unique operation. Every nose should be tailored for only that person. No two people should have the same nasal shaping performed.  With the variousethnicities in Los Angeles, this is even more important. This makes the operation of nose jobs even more challenging, yet always fun and exciting.

Rhinoplasty, since its origins has been intimately tied to specific ethnicities.For example, John Roe used endonasalnose job approaches to perform cosmetic rhinoplasty on the “pug nose” (referring to Irish patients that had excessive nostril show and a high nasolabial angle), while Jacques Joseph, modified tips and dorsal humps in 1920s-1940s Germany. More recently, there have been numerous articles, documentaries, and media exposure over the popularity of rhinoplasty in Tehran, Iran, which is referred to by popular media as “the capitol of nose jobs.”   InBeverly Hills, it is interesting to see that many of the Iranian-Americans want something slightly different than their fellow Iranians residing in Iran. In addition, sometimes the mom that comes with her daughter to the nose job consult wants something different and is very involved throughout the process.

In the United States, “standards of beauty” propagated by the mass media, are mostly based on Northern European facial traits with well-defined aesthetic goals (straight, narrow bridge, narrow and sharply defined nasal tip, a nasolabial angle of 90 to 95 degrees in men and 95-105 degrees in women.  However, refining the nose of ethnic patients does not adhere to these European-based characteristics, which can lead to “racial incongruity”.

“Racial incongruity” refers to an imbalance between the physical traits of individual and their ethnic background.  A marked disproportion between nasal and facial morphology can be very conspicuous and awkward.  For example, a sharp supra-tip break and an overly narrowed alar (nostril) base in an African American patient with Fitzpatrick 6 skin type (darkest skin colors), and thick fatty-fibrous skin, appears unnatural and over-done.  Many times African American patients in the media look like they have a nose that resembles a triangle that is too narrow for their face,  These are examples of incorrectly performed nose jobs that look imbalanced with the ethnic facial features and look overall fake and overdone. Many of the principles of avoiding and “over-operated” looking nose, are inherent to cosmetic nose surgery regardless of ethnic origins.  These concepts are even more important in ethnic patients and racial imbalances can be prevented through accurate pre-operative evaluation and a precise custom-tailoredrhinoplasty.

Specific ethnic groups  desire rhinoplasty in the Los Angeles and Beverly Hills area that I see on a weekly basis: African-American, Hispanic (Many of which are Mexican-American), Middle Eastern (Persian or Iranian, Armenian, Arab etc.), and to a lesser extent Asian patients. A pre-operative evaluation and treatment plan that is sensitive to the ethnic nasal and facial features is very important.  While each ethnic group reveals a variable spectrum of nasal characteristics, certain classical features are commonly present and should be recognized by the plastic surgeon. 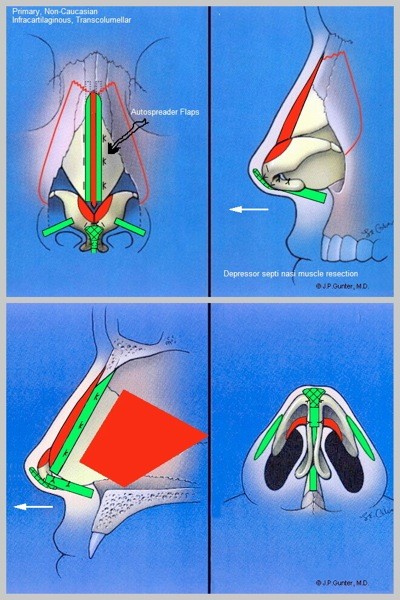 Throughout the history of plastic surgery, most of the nose job lessons that we have learned and continue to improve upon have been by way of our non-Caucasian patients. Ethnic patients generally fall into two categories, those that want a “dramatic” difference without close attention to retaining their “ethnic” nose, and those that want subtle, natural refinement, without any loss of ancestral traits.   The authors advocate a more “natural” approach to ethnic rhinoplasty. Furthermore, an open approach rhinoplasty works best for the complex, multidimensional nasal features of ethnic patients. Trying to perform complex tip shaping and skin debulking through small internal incisions only is limiting and asking for a future revision or shortcomings.

Face the world with a rested, refreshed appearance.

Address the features of your nose that make you self-conscious.

Feel more confident about your physique through body sculpting surgery.

Explore Dr. Ghavami’s patient reviews, or write your own.

Enhance, reduce or lift your breasts to complement your figure.

Familiarize yourself with some of Dr. Ghavami’s publications.

Even out your skin tone and texture with a non-surgical treatment.

Improve the size and shape of your buttocks for a more voluptuous backside.